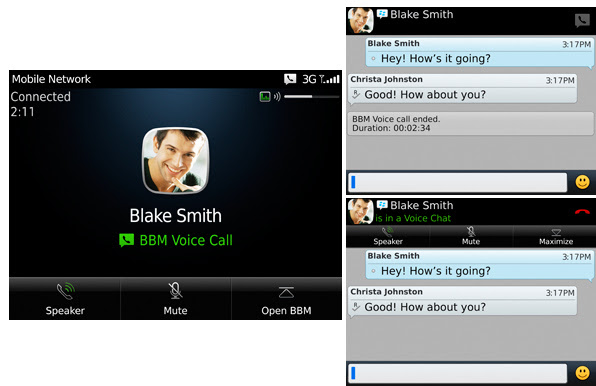 Hot off the announcement of worldwide BlackBerry 10 events in January, RIM has introduced an awesome new version of BBM today. BBM version 7 includes some great updated features including the new BBM Voice. BBM Voice lets you instantly initiate a voice call with BBM friends for free over a Wi-Fii connection.
In any BBM conversation, simply tap the call button and you'll start a voice call - it's that simple. BBM Voice will add some great depth to BBM, providing you the ability to escalate a chat to a voice call when the situation calls for it. This feature should be huge in emerging markets or for anyone calling long distance as there will be no long-distance charges.
Additionally, in BBM you'll be able to see each users status as well so you'll know who is available for a call and who isn't. When on a call you'll see a split-screen view and can still use any other apps on your device. So you can still use the chat function as well as send pictures within BBM or even check email or use the browser.
BBM Voice is included in BBM version 7 which is available in the BlackBerry Beta Zone. If you don't have a Beta Zone account you can register for one from the link below. Don't worry if you're not seeing it yet, it'll be along soon. We'll have plenty more on all the features of BBM 7 soon so stay tuned. Keep reading for the full press release.
Check out more in the BlackBerry Beta Zone

WATERLOO, ON - For the times when you want to hear a friend's laughter instead of reading LOL, BlackBerry® Messenger (BBMTM) is taking the social networking experience to a whole new level with an exciting new feature called BBM Voice. Research In Motion (RIM) (NASDAQ: RIMM; TSX: RIM) today announced BBM version 7, a free update for the globally popular mobile social network, which will allow customers to make free voice calls to other BBM customers in the world over a Wi-Fi® connection*.
BBM is a fast, convenient and inexpensive service for BlackBerry® customers that gives them the ability to instantly chat with a friend, family member or colleague, and know when their message has been delivered, and read. With the new version of BBM, customers have a new option - they can talk with their BBM contact across the globe for free over a Wi-Fi connection. In an instant, customers can switch between texting and talking, or talk and text at the same time. For consumers, especially in developing markets, the BBM Voice feature offers an attractive way to talk with friends and family near and far, and staying in contact will be easier than ever as the holiday season approaches. For business customers, BBM Voice allows for enriched collaboration.


"BBM is the quick, easy way to stay connected to the people that matter to you, and with today's announcement we're expanding the capabilities of the service for deeper social engagement and even greater collaboration, beginning with voice functionality," said T.A. McCann, Vice President of BBM and Social Communities at RIM. "The new BBM Voice feature is for when you're travelling and you want to call home without worrying about phone charges. It's for when you have news you can't wait to share, for quickly explaining complicated details, and collaborating with colleagues. Whenever your ideas are too big for text, there's BBM Voice."

BBM Voice includes a number of convenient features.
Another important feature of BBM version 7 is its integration with a customer's BlackBerry ID, which is designed to back up their BBM profile, groups and contacts so they can automatically be restored in the event they switch to a new BlackBerry smartphone, including to a BlackBerry® 10 device.
BBM version 7 with the new BBM Voice feature is currently available in Beta for BlackBerry smartphones running the BlackBerry® 6 OS or higher with support planned for smartphones running the BlackBerry 5 OS at a future date. The Beta can be downloaded for free from BlackBerry Beta Zone**. Customers can sign up to BlackBerry Beta Zone for free at www.BlackBerry.com/betazone