The official Twitter app for Windows 8 is now available

The official Twitter app for Windows 8 is now available

With Twitter limiting third party developer API access, users either have to find an application for their system that has not reached that limit yet, or use one of the official clients that Twitter makes available if they want to use a Twitter program and not Twitter on the official website.
Twitter has just released its official application for Windows 8 and while Windows 8 is not showing a single rating for it yet, it boasts an impressed 394 user reviews already. It is the only application that won't run into the 100,000 user limit and while there are not many Twitter clients yet for Windows 8 that come close to that limit, it is certainly one of the things that users should consider when selecting a Twitter client for the operating system.
You need to sign in with your Twitter user name and password. Here you can also check a box to stay signed in, and let the Twitter application run in the background. That's useful if you want it to update automatically even if it is not in the front.
The main window displays the most recent messages of your Twitter stream. You can click on any item here to reply to it, retweet it or star it. The client displays the responses a message has received as well. 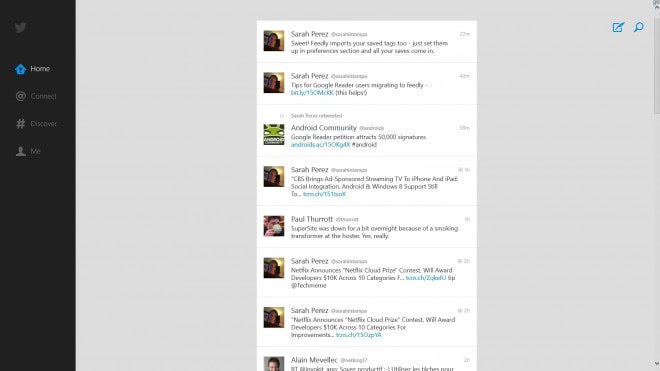 The left sidebar links to the home screen of the application, the connect screen which displays new followers and tweets your account has been mentioned in, the discover screen which displays popular and trending hash tags, and the me screen which displays information about the Twitter user and recent tweets.
The two icons on the top right let you compose a new message on Twitter and use the search to find contents on the social messaging site.
The official Twitter client for Windows 8 is rather bare bones right now even though it includes all the features that you would expect from a Twitter client. It would obviously be great if you could follow different hash tags easily using the client.
According to Twitter's official announcement, the client does make use of features specific to Windows 8:
Here is the announcement video
If you are using Windows 8, especially on a touch-based device, this is without doubt the Twitter client to evaluate first.
The post The official Twitter app for Windows 8 is now available appeared first on gHacks Technology News | Latest Tech News, Software And Tutorials.