With Windows XP support ending in one year, what are the options?

- April 08, 2013
With Windows XP support ending in one year, what are the options?:
So, the support deadline of Windows XP will not be prolonged and end on April 8, 2014. The change is affecting many computer users, with companies collecting statistics about operating system use seeing the operating system's use as high as 38%. While the count will certainly go down, a trend that started with the introduction of the Windows 7 operating system, it is fair to assume that there will be millions of users still using Windows XP when the deadline arrives.
So, what does it mean for XP users? End of support means that Microsoft will not release security patches anymore for the operating system. Regular patches or feature additions have not been added for years as mainstream support of Windows XP ended on April 14, 2009. 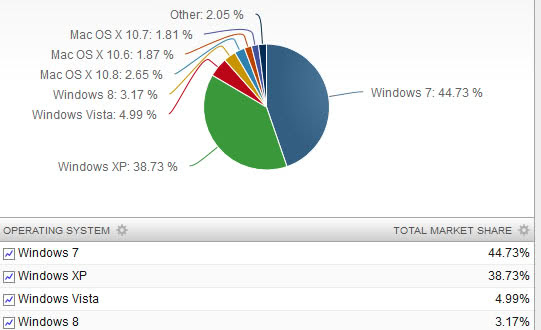 The effect won't be noticeable immediately but XP users will put their systems at risk in the long run. There are certainly options to mitigate some of the issues that remain unpatched in the operating system after April 8, and end users may not mind doing so, but businesses may not want to expose their systems to that risk.
Microsoft wants businesses to upgrade to Windows 7 or Windows 8. While the company mentions Windows 7 as an option, for instance in today's press release or here on the Windows for your Business blog, it puts much of the focus of both articles on Windows 8. The company launched the Get Modern offer recently targeting small and medium sized businesses. The website highlights some of the potential business implications, from security risks to end of paid support or software issues that may have a devastating effect on the business and its operations.
The company is making special offers available to businesses that still run Windows XP on some of their systems. An upgrade to Windows 8 or Office Standard 2013 is offered with savings of up to 15%, and there are also some laptop, desktop PC and tablet offers available that save businesses some money.
For end users, pricing of Windows 7 and Windows 8 is not that different either. The Windows 8 Pro upgrade retails for about $100 for now while the comparable Windows 7 Professional upgrade retails for around $150. Windows 7 Home Premium on the other hand retails for about the same price as Windows 8 Pro.
The operating system itself may be the deciding factor more than its price though with the interface changes introduced to Windows 8 by Microsoft.  Users who prefer an operating system that looks, feels and behaves closest to Windows XP should definitely pick Windows 7. The more adventurous type may pick Windows 8 as it may require more getting used to time after all.
What about Linux? This may an option and various distributions have made huge leaps in terms of usability and functionality in recent time. Then again, if you like to play games from time to time or need to run software that is not available for Linux, then it may not be an option at all. Valve may bring gaming to Linux but the time it will take is long and it won't happen in the next couple of years.
Are you still running Windows XP? Have you already decided what you will do when support for the operating system ends?
The post With Windows XP support ending in one year, what are the options? appeared first on gHacks Technology News | Latest Tech News, Software And Tutorials.
Microsoft Windows