Microsoft Office for Android now available, but not for tablets 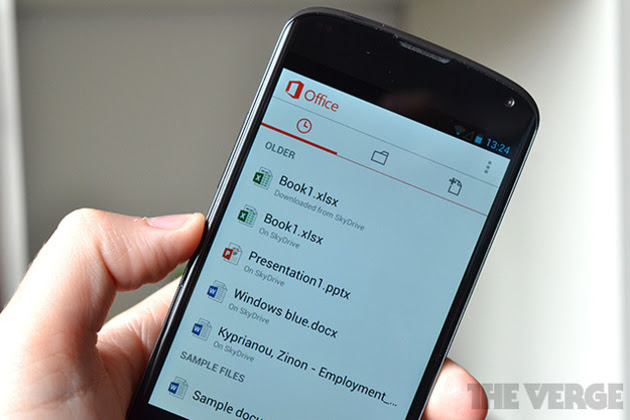 Microsoft is extending its Office mobile software to Android this week, bringing basic editing to smartphones running Android 4.0 or higher. Following the release of Office for iPhone, the Android variant is almost identical in what it provides and its requirements. You'll need to sign into the application using an Office 365 subscription to view or edit documents, and Microsoft isn't providing a standalone or free version.  Much like the iPhone version, Office for Android includes a recent documents tab and access to create Word and Excel documents. Microsoft is optimising the Word, Excel, and PowerPoint apps within this application for phones. There's no plans for an Android tablet version, and Microsoft is recommending users make use of the Office Web Apps on tablets. Just like the Windows Phone and iPhone versions, the editing functionality on the Android edition is very basic. It's designed to simply be used for correction, formatting, and comments. Basic formatting like bold, italics, and font color options are supported, but beyond this it's rather limited.
Documents are all stored on Microsoft's SkyDrive cloud storage service, and can be shared via email using the Android app. There's not a lot of settings included, with the simple ability to change your name that's associated with document comments. One difference from the iPhone version is that there's no option to purchase an Office 365 subscription within the app, replaced simply with a sign-in that requires users to already have an active subscription.  Office for Android is rolling out today in the Google Play store for US customers, and Microsoft says it's "gradually" expanding to 33 other languages and 117 markets soon.
Android Google Microsoft Office