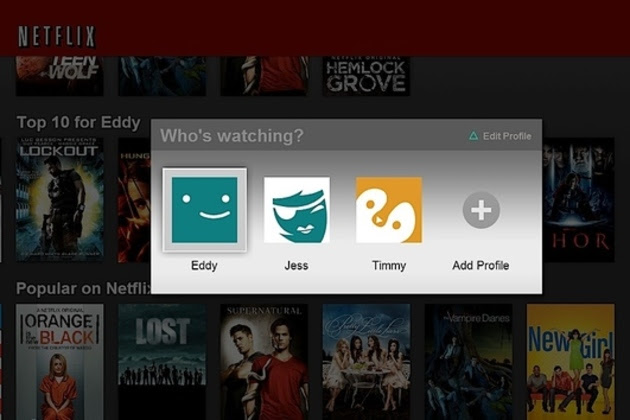 Netflix has built one of the world's most powerful recommendation engines. But if you belong to a family sharing a single account — dad loves screwball comedies, mom loves slasher films, little Timmy is an action flick fan, and baby Pete watches mostly cartoons — it can have a hard time pinning down your personal taste. Without good suggestions, users can be left feeling as if Netflix's streaming service, which lacks a lot of big titles and new releases, has little worth watching.

So today the web's top video-rental service launched Netflix Profiles, which enables multiple users of the same account to create their own profile page. The idea is to give the company a better idea of an individual viewer's preferences.

Multiple users on the same account complicates recommendation process The majority of Netflix accounts are used by multiple people, typically members of a household, according to Neil Hunt, the company's chief product officer. Netflix relies on in-house algorithms to suggest titles, and they're partly based on the subscriber's viewing history and the history of users with similar tastes. When there are multiple people on the same account, Hunt says, the recommendation process becomes too much like hitting a moving target. Hunt tells The Verge that there's "no doubt in my mind," that the profile pages, which are offered free of charge, will lead to more customer satisfaction.

When customers log on, they will see a different color tile representing each user on the account. Once they click on their tile they'll be directed to their own Netflix page. Each user will see only the titles that Netflix thinks they'll like as well as recommendations from their Facebook friends. The user interface won't change.

Besides helping Netflix to tailor its recommendations, the new profile pages are designed to help Netflix squeeze every nickel of value out of its streaming library. The money Netflix has spent on House of Cards and other original content has generated a lot of headlines, but the company still can't stream new releases from most of the top Hollywood film studios. So Netflix must make the most of the content it does have, and that means helping obscure videos find their perfect audiences.

And if that disaster of a disaster film Sharknado taught us nothing else, it was that there's a market out there for almost anything.