Good news for users of the Windows 8.1 operating system: Facebook just launched its official application for the system so that users of it can now use the official app instead of any of the unofficial ones that were available in store before.

The app is available on all systems that are already running the Windows 8.1 RTM that is officially released tomorrow to the public.

Tip: If you just search for Facebook in store, you will find too many results which makes it really difficult to find the official application. The easiest way to find it is to filter by newest app and to limit the category of apps displayed to social.

The application itself looks very similar to Facebook's Internet site, but you will notice a couple of differences. The most obvious ones are that the menu on the left is displayed in full at all times, that the search is displayed on top of it and not in the center, and that the right sidebar does not list sponsored ads but a list of group chats and top friends instead. 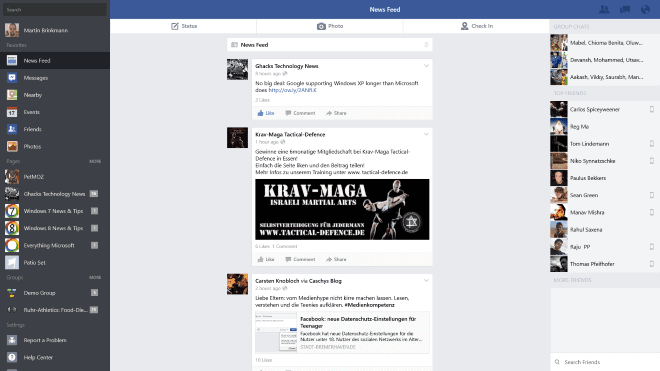 You find status, photo and check-in tabs at the top for easy access to the functionality, and you will notice that many of the buttons have increased in size to improve the usability of the app on touch devices.

The main question that may come to your mind is this: why would anyone want to use a Facebook app if they can open the Facebook website instead?

The app is optimized for touch, which is a plus as the Facebook website is not. There are other benefits. The app can run in the background and notify you about updates, while you cannot do the same if you have Facebook open in your favorite browser. While you can keep the browser window up at all times, it is not the same as running it in the background.

As far as power consumption goes, the native app may also be more beneficial to your system's battery life, but that needs to be tested in benchmarks first.

You can also share photos posted on Facebook using the Share charm, for instance to attach them to an email that you are about to write. The Share to Facebook does not seem to work right now, or may not have been implemented yet.

If you are a regular on Facebook and run Windows 8.1 on a touch device, then you will benefit from the installation of the official Facebook app.

It may be worth a try even if you are not using touch devices, as it provides you with other benefits that you do not get when you run the website version of Facebook.

Windows 8.1 is finally getting a good share of apps for popular services, something that the operating system was missing ever since it launched a year ago.