Microsoft has just released the final version of its web browser Internet Explorer 11 for Windows 7. The browser, originally released as part of the Windows 8.1 upgrade to the company's most recent client operating system Windows 8, is now also available for Microsoft's most popular operating system market share wise.

Windows 7 users who have installed the Developer Preview or the Release Preview of Internet Explorer 11 on Windows have not received updates automatically at the time of writing, and it is likely that updates will being to roll out in the coming days to users who have enabled automatic updates in the web browser.

Note: The installer may need to download components from the Internet despite its large size of about 56 Megabyte. The system requirements on the Windows website have not been updated yet. The only supported operating system listed on the website is Windows 8.1.

The system needs to be restarted after the installation to complete the process. 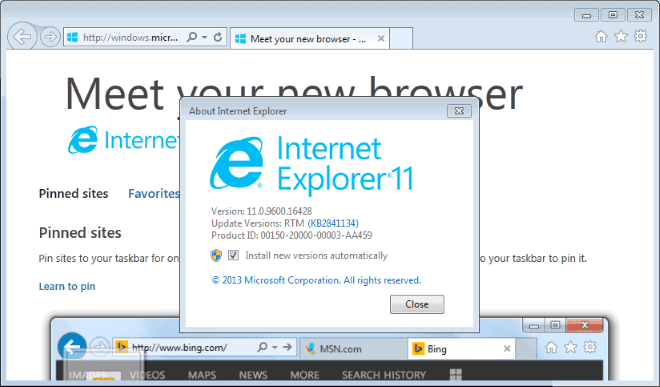 Microsoft has not made an official announcement yet, but there do not seem to be many changes to the Release Preview. In fact, the browser performed as well as the release preview in benchmark and compatibility tests suggesting that it is more or less the same version.

If you compare it to Internet Explorer 9 or 10, you will notice that things have improved considerably. The browser offers better performance and web standards support, and while it does not reach Firefox or Chrome levels yet, it is closing in on those browsers with every release that Microsoft makes.

You can consult our release preview review for additional details about Internet Explorer 11.