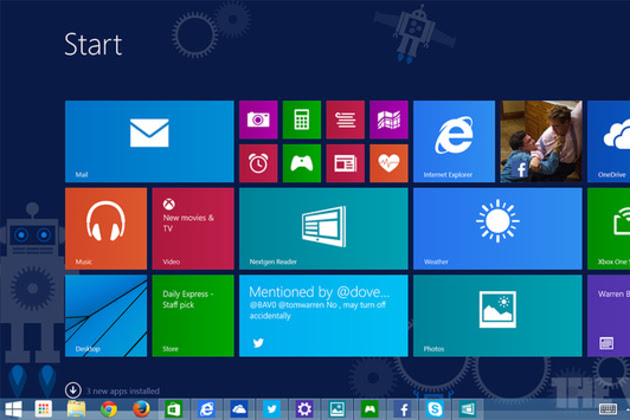 A near-final version of Windows 8.1 Update 1 has leaked online today, revealing what appear to be final changes that Microsoft is making to its upcoming update. While Microsoft has been testing changesduring the beta phase, The Verge can confirm that this latest build only boots to the desktop on non-touchscreen PCs by default. It appears that existing Windows 8.1 users who have not switched the boot-to-desktop option on will find it's enabled automatically after the Update 1 package is installed.

The same Update 1 on PCs and tablets with touchscreens will, understandably, not boot-to-desktop by default, so the tiled Start Screen interface still appears at boot. The change on desktop and laptop PCs without touchscreens is designed to improve the mouse and keyboard experience. Microsoft is also adding a shutdown option in Windows 8.1 Update 1 to the Start Screen to make it easier for mouse and keyboard users with desktop PCs. However, based on this near-final build, this will only be present on the Start Screen for machines without a touchscreen. It's not clear if this is a deliberate change or the result of a bug during development, but a new search button is enabled on the Start Screen regardless of hardware.

Other Windows 8.1 Update 1 changes include a new title bar at the top of Windows 8-style apps. It’s designed only for mouse and keyboard users, and appears as a bar with options to minimize, close, or snap apps. On touchscreen machines this title bar is not displayed by default, but it will appear on PCs with a mouse or trackpad by hovering over the top section of an app. Similar improvements have also been made to the Start Screen, where right-clicking on Live Tiles now produces a context menu with options to resize, unpin, and more.

Microsoft is also adding a "show Windows Store apps on the taskbar" option. If enabled, Windows 8-style ("Metro") apps will be displayed in the desktop taskbar, with window previews available. This option also allows mouse users to hover to the lower part of Metro apps to reveal the taskbar and switch between all apps. The taskbar can be displayed above Metro apps, and you can even activate it when you’re on the Start Screen. However, Microsoft appears to be aware of accidental activation as you have to drag down slightly with the cursor to activate it fully within Metro apps or the Start Screen.

Other noticeable changes include a new "disk space" option in settings and the rebranding of SkyDrive to OneDrive across the OS. The new disk space option lists individual app sizes, but it will also collate file sizes for media such as pictures, videos, and music. It’s designed as an easy way for Windows 8.1 users to free up disk space. Microsoft has not yet finalized Windows 8.1 Update 1, but the company is expected to release the update in April just after the Build 2014 developers conference.