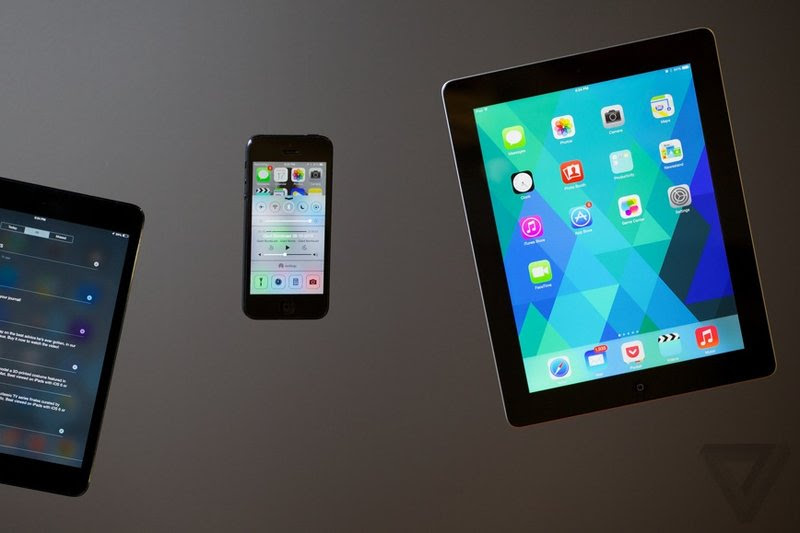 The long-awaited iOS 7.1 update is now available. While this is a point release, Apple has made several tweaks to the iOS user interface, alongside the usual bug fixes and some feature additions. The main visual changes can be found in the phone dialer and power off features. iOS 7.1 switches to rounded UI elements in both of these areas, and the incoming call interface now includes separate decline and accept buttons below floating circular icons for the Remind Me and Message options.

Other UI tweaks are fairly minor, including a slight music app refresh with prominent repeat and shuffle icons, and the option to disable wallpaper motion when selecting an image. iOS 7.1 also includes improvements to the keyboard interface, making the shift and delete keys easier to see. Perhaps the best visual tweak in iOS 7.1 is a change to the Notification Center, which appears to allow you to clear notifications more accurately.

Aside from the visual tweaks, iOS 7.1 finally includes a fix for something you hopefully won't see anymore: random reboots that iPhone 5S, iPad mini with Retina display, and iPad Air users have been experiencing. Apple promised a fix in January, and the issues have existed since the launch of iOS 7, causing some devices running the latest OS to randomly reset for no apparent reason. Some iPhone 5S users have also complained of Touch ID issues, and Apple has tweaked the recognition to make it faster and more accurate in the latest update. If you're stuck on an iPhone 4 and you've not yet upgraded, Apple has also optimized iOS 7.1 to run faster on iPhone 4 hardware. The same goes for older iPads, like the iPad 2, and third-generation iPad. 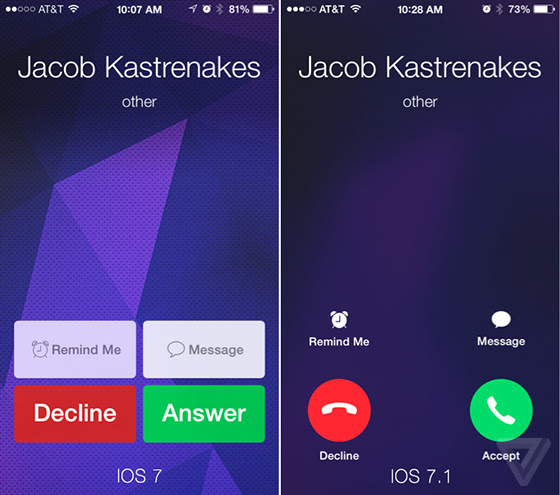 CarPlay is the big new feature for iOS 7.1

iOS 7.1 also includes support for Apple's new CarPlay feature. Known previously as iOS in the Car, CarPlay is built primarily around the use of Siri voice commands and prompts, providing an "eyes-free" experience where you can respond to incoming calls, dictate text messages, or access your music library from a vehicle. Ferrari, Mercedes-Benz, and Volvo will support CarPlay in some of their new cars at launch, and a broader range of carmakers, including Ford and BMW, are promising to integrate CarPlay with their future in-car entertainment systems.

iTunes Radio has also been tweaked in iOS 7.1, allowing you to search within featured stations and more quickly create new stations based on searches for songs and artists. And for the first time, Apple now lets people subscribe to iTunes Match right from their device, instead of in the desktop version of iTunes. This removes the ads in iTunes Radio, and provides a year of Apple's scan and match music service.

Another change in iOS 7.1 is an adjustment to how Siri is triggered. Siri still activates using the home button, but in iOS 7.1 you can hold the home button down to ensure Siri listens for longer and doesn't cut off any pauses in your query. Overall, the changes are minor, but welcome, additions to an operating system that powers millions of devices. Since releasing iOS 7 back in September, Apple has fixed lock-screen security issues, iMessage problems, FaceTime call drops, and a major security flaw. The latest iOS 7.1 update is available immediately.

Josh Lowensohn contributed to this article