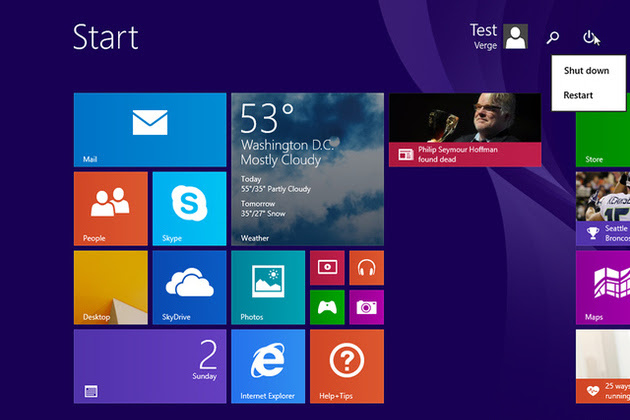 Microsoft has completed the development process of Windows 8.1 Update 1. Sources familiar with Microsoft's plans have revealed to The Verge that the software maker recently signed off on a final version of the update, a process known internally as Release to Manufacturing (RTM). Microsoft has started sharing Windows 8.1 Update 1 with partners and PC makers ahead of its release next month. Russian leaker WZor claims the final update was originally compiled on February 21st.

While the update is ready, it's not clear exactly how Microsoft intends to brand the final version. The company announced Update 1 as a 'spring' update for Windows 8.1 during a press event at Mobile World Congress last week. Most of the changes in the update are designed to appease keyboard and mouse users, with options to show Windows 8 apps on the desktop taskbar, the ability to see show the desktop taskbar above Windows 8-style apps, and a new title bar at the top of Windows 8 apps with options to minimize, close, or snap apps. Microsoft is also adding a shutdown button to the Start Screen for non-touch machines, with a new search button present across all machines.

Alongside some context menu changes, where right-clicking on Live Tiles now produces a menu with options to resize, unpin, and more, Microsoft is also tweaking how its boot-to-desktop option works in Windows 8.1 Update 1. Microsoft is planning to automatically boot Windows 8.1 non-touch PC users to the desktop interface by default, as long as they haven't already changed the existing setting that allows you to bypass the tiled Start Screen. Early test builds also altered the default apps associated with audio files and photos, allowing desktop apps to open the files if boot-to-desktop is automatically enabled. It's not yet clear if that change has made its way into the final version of Windows 8.1 Update 1.

Microsoft is also tweaking the amount of disk space that Windows 8.1 utilizes. Alongside new license cost changes, Windows 8.1 Update 1 will allow PC makers to produce machines with just 1GB of RAM and 16GB of storage, a change that will help bring lower price points. Combining all these changes together, it's clear that Microsoft is adjusting to feedback and willing to invest in the Windows 8.1 desktop. Microsoft will now release Windows 8.1 Update 1 to existing machines on April 8th, following the company's Build developer conference in early April.