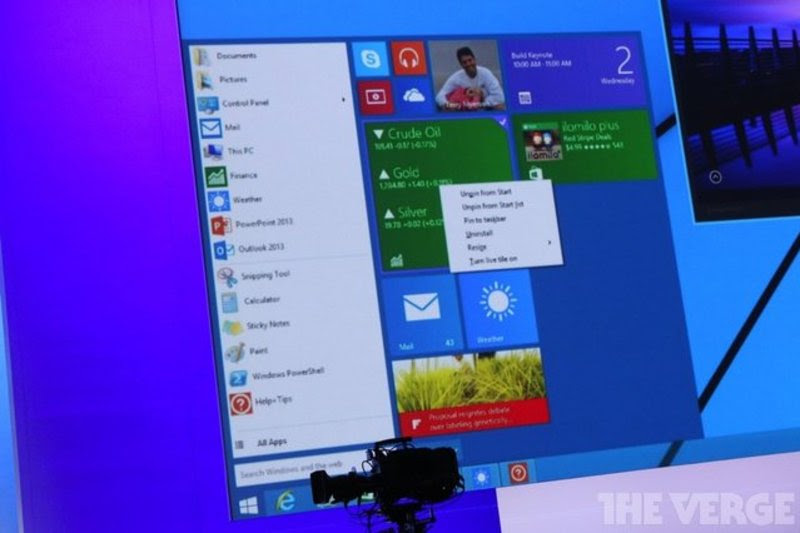 Microsoft revealed earlier this month that the Start Menu will return to Windows 8. While Microsoft is keeping the timing for its return vague, sources familiar with the company's plans tell The Verge that the Start Menu will likely be available in a second update to Windows 8.1 currently scheduled for August. Microsoft's Terry Myerson, head of Windows and Xbox software, demonstrated an early prototype earlier this month of what the Start Menu will look like once it's available. It looks like a hybrid of the old Windows 7 Start Menu mixed in with some Windows 8 Live Tiles along one side.
Myerson also revealed that Microsoft will allow Windows 8-style "Metro" apps to run in the desktop environment inside their own windows. Both the changes bear more than a passing resemblance to a concept by a graphic designer that The Verge highlighted late last year. While Microsoft is expected to deliver the true windowing type of functionality in a "Windows 9" release next year, sources note that the company is pushing to try and get this ready for the second update to Windows 8.1 in August. Both the Start Menu and windowed apps could be pushed to the bigger "Windows 9" release, currently codenamed Threshold, but the current plan is to deliver these changes as soon as possible.
Microsoft speeds things up again
ZDNet originally reported on the second Windows 8.1 update earlier this week, and claims that it's being developed as a way to speed up Windows releases. Microsoft already made some internal changes to increase the cadence of its Windows releases to once per year, but it appears that schedule is being accelerated. This is partly because Microsoft needs to fix the shortcomings in Windows 8, but also because competition like Android and iOS are constantly pushing out updates that bring changes and features.
We understand that Microsoft is still planning to merge its Windows Phone and Windows RT products to create a single operating system that runs across ARM-based hardware. At its Build developer conference, Microsoft revealed Windows will be free for computers and phones under 9 inches, a move that's in place ready for this future version of Windows. We're told this merger is part of the bigger work for the "Windows 9" release that's currently due in spring 2015. Microsoft has hinted at this work on numerous occasions, but officials have not yet confirmed the company plans to merge Windows RT and Windows Phone. 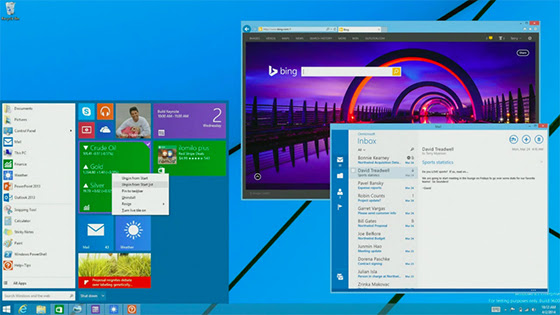 Regardless of Microsoft's future Windows plans, the current Windows 8.1 Update is a stop-gap towards a second update with additional functionality. If Microsoft is able to deliver the Start Menu to Windows 8 users in August it will address a key complaint from those who are more familiar with the traditional Windows desktop. Many have called for Microsoft to focus on desktop users, and the company has clearly accepted the feedback. "We're going all in with this desktop experience," said Microsoft's Terry Myerson earlier this month. It's a sign that Windows is about to become Windows again.