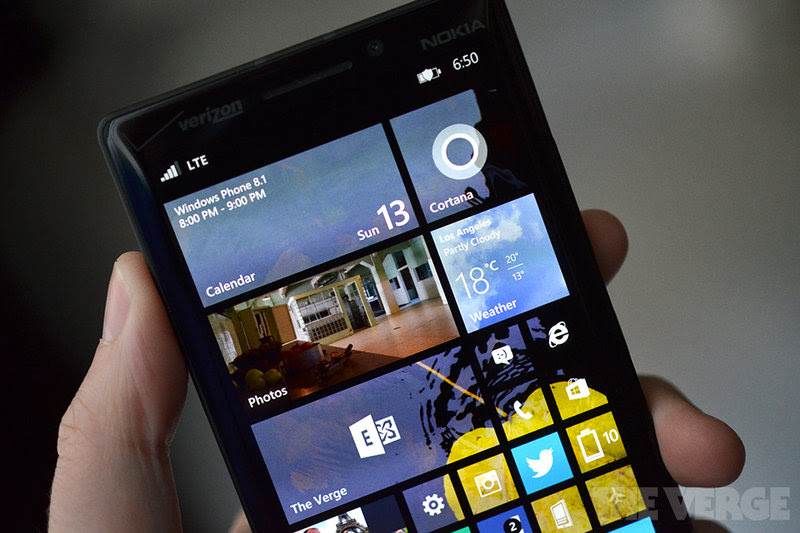 After 18 months since the last major Windows Phone update, Microsoft is finally releasing Windows Phone 8.1 to developers today. The software maker detailed the update at its Build conference less than two weeks ago, and it's clear the version point increment doesn't tell the whole story. This is a significant update to Windows Phone 8, with new features like the Cortana digital assistant, a new notification center, and skinned Tiles for the Start Screen.
Registered Windows Phone developers can now start downloading the update on their devices, but if you're not a developer there's still an easy way to get Windows Phone 8.1 before your carrier is ready to start distributing it. Just head over to the Windows Phone App Studio site and sign in with your Microsoft Account and create a project. It's free to sign up and then you can simply download a special preview app on your existing Windows Phone 8 device and sign in to the app with a Microsoft Account to enable the phone to detect the 8.1 update from the "phone update" section in settings.
You don't have to be a developer to download it
While this method will enable access to the final Windows Phone 8.1 software, there are some limitations you should be aware of. The developer preview method will void your device warranty until your carrier has officially rolled out Windows Phone 8.1 and any associated carrier or device customizations. The update will only upgrade the OS software, and not the customizations made by device makers like Nokia. These future updates will be installable once they're ready, but if you run into any early bugs with Windows Phone 8.1 on your device then you won't be able to roll back to Windows Phone 8.
The majority of Windows Phone 8.1 features will be available worldwide, but the Cortana digital assistant is US only for now. Microsoft is promising support for the UK and China in the second half of the year, with other countries to follow afterwards into 2015. If you want to use Cortana earlier then you'll need to set your device to the US region, which will restrict some local functionality depending on your country. The developer preview of Windows Phone 8.1 will also not include the custom lock screen support that Microsoft previewed at Build.
If you're aware of the limitations and early nature of Windows Phone 8.1 then it's available to download on devices immediately.