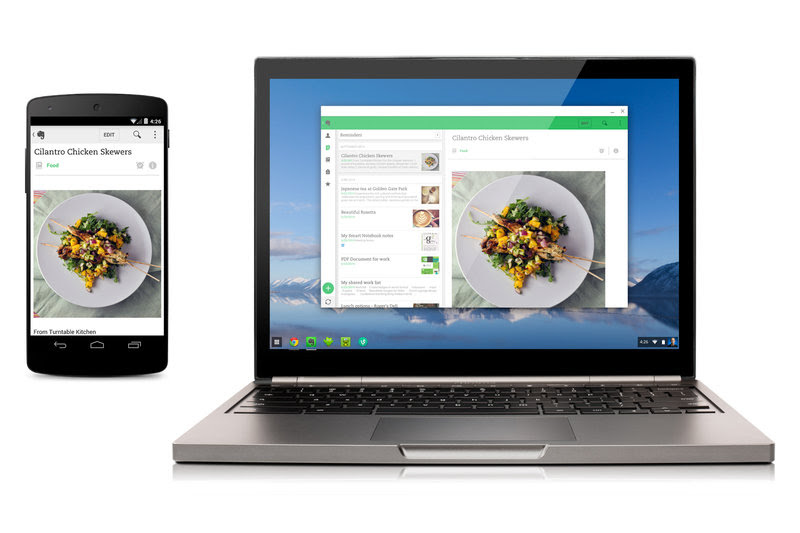 Android apps are coming to Chrome OS, and the very first of them arrive today. Vine, Evernote, and two other Android apps can now be run on Chrome OS and operated using a mouse and keyboard. This is the start of a potentially huge change for Chrome OS, which should ultimately make the operating system far more powerful and filled with a much richer selection of apps. The language teaching app Duolingo and the children's app Sight Words are the other two apps being made available today. All four apps will be available in the Chrome Web Store.
Google wants putting Android apps on Chrome OS to take "little to no" effort
Chrome and Android chief Sundar Pichai revealed the initiative to get Android apps running on Chrome OS back in June. Google tells us that it would ultimately like for Android developers to be able to bring their apps over to Chrome OS with "little to no engineering effort" beyond perhaps a few interface changes, but for now it's still working with individual developers to get these apps up and running. More Android apps will be adding Chrome OS support over the "coming months," and Google is actively taking suggestions on which ones should come first.
Not to devalue the project, but the current selection of Vine, Evernote, and Duolingo is perhaps a poor start: all three of those apps have robust websites too. Still, Chrome OS's selection of native web apps is limiting in most cases, even if it does offer enough to get most basic jobs done. There's a lot more to be found on Android, and that's great news for Google — which wants to see Chromebooks take over the low-end laptop market — and for current Chromebook owners, who should soon have a lot more apps to use.