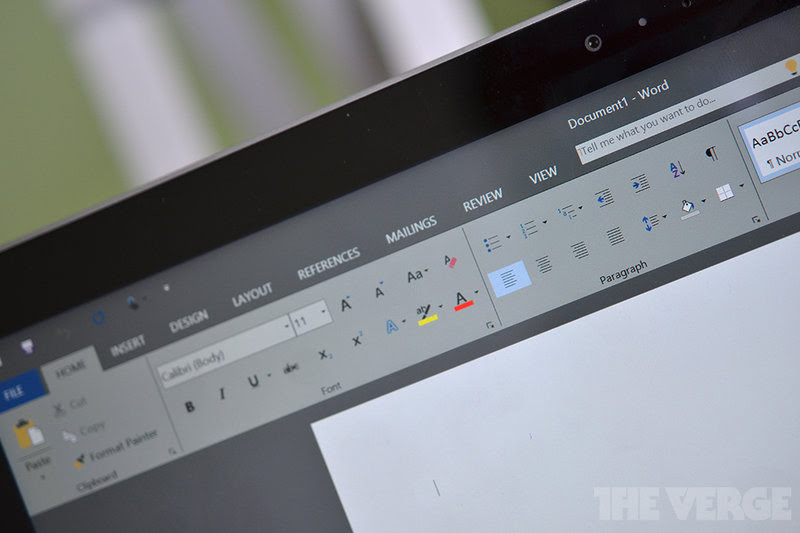 Microsoft is busy preparing a "Windows Technical Preview" for later this month, but the software maker is also privately testing an "Office Technical Preview" for the next version of its popular Office suite. Sources familiar with Microsoft's Office plans tell The Verge that the company has been distributing copies of a future version of Office to partners and testers recently, providing an early look at new features.
While testing is in the early stages, we understand Microsoft is adding the "Tell Me" helper found in its Office Online apps to the desktop versions. Tell Me sits at the top of documents as a type of help and search tool. It's similar in function to Clippy, providing a quick way to discover features and ask questions without digging into the vast help documentation found in Office. There's no animated character like Clippy, just a simple bulb icon to indicate its presence in documents. Asking questions like "how do I insert images?" will bring up relevant features and additional help. It's mainly a tool to help Office users discover the vast amount of features that are available across all the individual apps.

A new black theme was the number one request for Microsoft Office
Microsoft's Office Ribbon is still present, and there are no major user interface changes just yet. Microsoft has, however, added a new black. We're told that the black theme was the number one feature request for Office 2013, and Microsoft is seeking feedback on its implementation to tweak any areas that are too bright. It's an unusual look for Office, but if you're used to regularly working in documents then it appears to be easier on the eyes than the white theme. The black theme isn't default, it's just an option for Office users alongside the light gray, dark gray, and white themes.

Other new features include automatic image rotation, allowing Microsoft to use camera metadata to correctly position images in Office documents. Once pictures are inserted, Office will automatically rotate a picture to match the camera's orientation, with options to manually rotate afterwards. Microsoft is also improving its Outlook email client with sync options to just download 1 day, 3 days, 7 days, or 14 days of email. In the existing version of Outlook you can only download a minimum of one month of email, so the new option will improve any space issues on Windows laptops and tablets with limited storage.
The majority of Microsoft's improvements in what is known as "Office 16" are fairly minor improvements. This next version of Office should set the schedule and the ability for Microsoft to regularly update Office 365 with new features, improvements, and fixes. That was the promise of a subscription version of Office, and it appears Microsoft is planning to deliver that for its desktop users.