The SIM card is about to die

If there's one thing I've learned about Apple's dealings with SIM cards in the past seven years, it's that Apple gets what Apple wants.
The little gold-plated circuits — which identify you as a subscriber on a particular carrier — plug into phones, tablets, and basically anything else with a cellular radio. Customers of GSM carriers like AT&T and T-Mobile have been using them since time immemorial; CDMA carriers like Sprint and Verizon have started using them since switching to LTE. Apple hates SIMs, and has hated them for as long as the iPhone has existed: it is known to have explored the use of embedded, non-removable SIMs in the past.
Finally, with the iPad Air 2 and mini 3, Apple has decided to start making its move by using a reprogrammable SIM that can be taken from carrier to carrier, switching networks and pricing plans through user-friendly software alone. It's called "Apple SIM." Not every carrier is on board yet — Apple SIM is still removable, and carrier-bought iPads will use regular, locked SIMs — but the writing is on the wall. The wounds are mortal. Within a year or two, you'll probably never see a SIM card in an Apple product again. You may not even see a tray.
Within a year or two, you'll probably never see a SIM card in an Apple product again
Every time Apple has tweaked the SIM formula, it has won. Just look at the original iPhone in 2007: the notion of a handset with a SIM card that could only be accessed by triggering a fidgety little tray using a paper clip was insane. Yet today, many flagship smartphones are using them (the main holdouts are phones with replaceable batteries — another notion that Apple practically shut down). "SIM tools," little pieces of easy-to-lose steel that will prick you if you're not careful, just seem like a totally normal thing to find in the box of a new phone now.
Next there was 3FF — better known as micro-SIM — which debuted on the original iPad in 2010. At the time, it wasn't fun: Apple broke compatibility with an enormous ecosystem of GSM devices, which made sharing an account with your iPad a huge pain. Slowly, carriers started offering micro-SIMs, but you still needed a flimsy, hard-to-find adapter to use those cards anywhere else. (It took a full product cycle, more than a year, for other manufacturers to skate to Apple's puck.) Apple never looked back, switching to micro-SIM with the iPhone 4 later that same year. 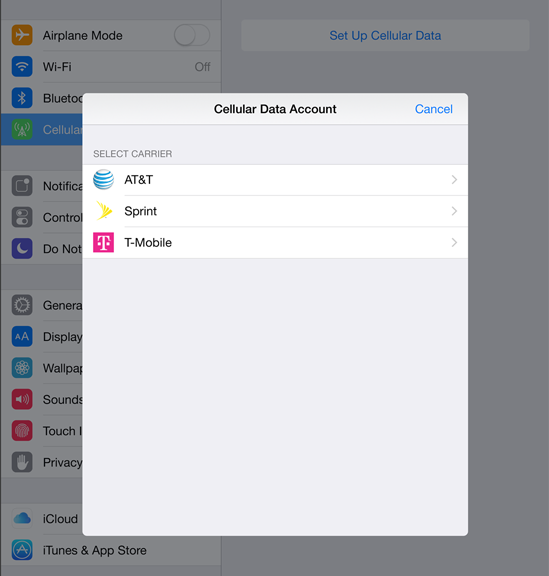 Apple isn't afraid to break compatibility
It happened all over again with 4FF, the nano-SIM standard that today's iPads and iPhones use. Apple first fought and won against a consortium of other phone manufacturers who were proposing a different (and more advanced) nano-SIM, then it introduced the new card to the market mere weeks later with the iPhone 5. Once more, carriers and competing phone makers had to catch up — even this year's Samsung Galaxy S5 is still on the older micro-SIM.
Apple's unique place in the market gives it extraordinary power over carriers, which are notorious for being difficult to work with and, often, stuck in their ways. And with the Apple SIM, only a small number of carriers are on board so far: AT&T, T-Mobile, Sprint, and UK's EE (Verizon, perhaps the most stubborn of them all, is missing). But, as with the introduction of the micro-SIM on the original iPad, this is a tell by Apple. It's a warning that the next iPhone will be using reprogrammable SIMs — and if a carrier would like to offer that iPhone, it had better start getting ready. It's easy to imagine that Apple could just eliminate the tray altogether, leaving uncooperative carriers on the sideline.
It's easy to bemoan the death of the removable SIM; for GSM customers, it's a symbol of freedom, a way to move between phones at will. But in reality, Apple's rapid progression from mini- to micro- to nano-SIM has already left us with a fragmented market, and tossing a SIM between Android and iOS phones can lead to provisioning issues that leave you stuck on the phone with customer service anyway. If Apple forces this issue — which, by all appearances, it's going to — it'll light a fire beneath carriers and competing phone makers that makes switching carriers easier than ever. (Switching devices, not so much.)