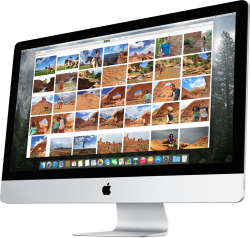 OS X 10.10.3 with the all-new Photos app will be available Wednesday as a free software update for Mac users, according to The Associated Press. The news organization mentioned the release date as part of its in-depth release about the all-new Photos for OS X app, which it praised for making basic photo editing easy.


"Procrastinate no more. Apple's new Photos app for Mac computers, available Wednesday as a free software update, makes it easy to organize and edit your pictures. The app, which replaces iPhoto, bundles professional-level tools such as granular color correction into one free consumer package."

OS X 10.10.3 will be available through Software Update in the Mac App Store.
Apple