- August 02, 2016
While the release date of the Windows 10 Anniversary Update is August 2, 2016, not all users will receive the update on that date as Microsoft plans to roll it out gradually.
Microsoft plans to deliver the update via Windows Update starting 19:00 CET, and via the Media Creation Toolkit at around the same time.
Using the Media Creation Toolkit has two advantages: first, you may get the update earlier, and second, you may download and create installation media instead of updating the PC directly. This way, you can perform offline updates among other things.
Note: We suggest you back up important data before you continue. Ideally, create a system backup so that you get an option to restore it if you run into issues during the update or afterwards. The update should pick up all files and programs, so that they remain available. Some programs may be removed however if they are not compatible with the new version of Windows 10. 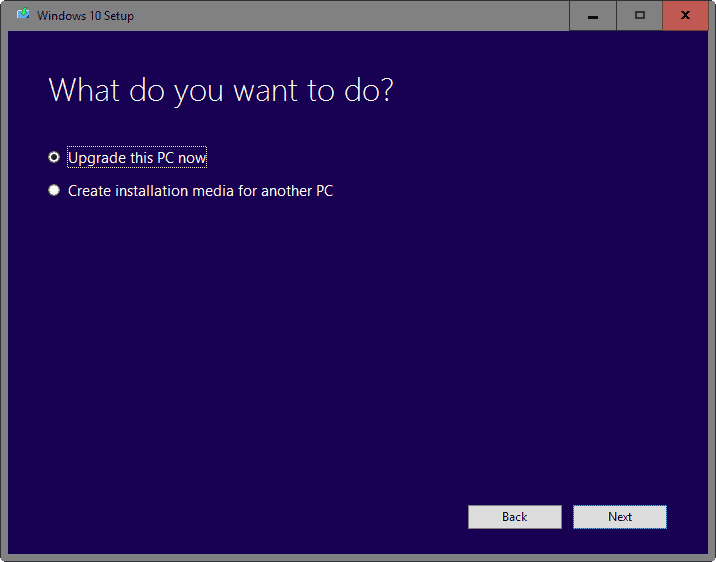 To get started, head over to Microsoft's website and click on the "download tool now" button to get started. This downloads the Media Creation Tool to your system.
You find instructions on how to use the program once downloaded on the site as well if you require them.
Tip: To make sure you got the right version, right-click on the MediaCreationTool.exe file and select Properties. Switch to details, and verify that the version reads 10.1.14393. 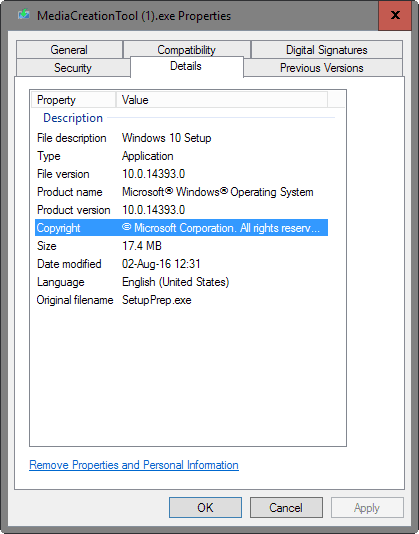 When you run the program, you get two options to proceed:
Both options are fine. Creating installation media is useful if you want to update multiple PCs, or need to update another PC, or want to keep the installation media at hand should the need arise to reinstall Windows.
If you want as quick of an update as possible, select the "update to the latest version of Windows 10" option instead.
The program connects to the Microsoft server then and downloads the Windows 10 installation files. This may take a while as Gigabytes of data are downloaded.
Tip: While you are waiting, check out AnandTech's epic the road to redstone article. 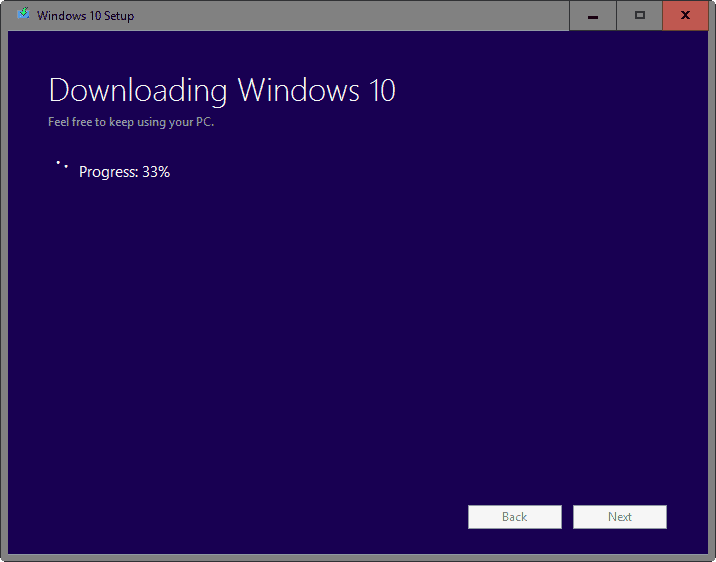 The tool verifies the download afterwards, and starts to create the Windows 10 media that is used to upgrade Windows 10 to the Anniversary Update version.
The process should be considerably faster than the download. 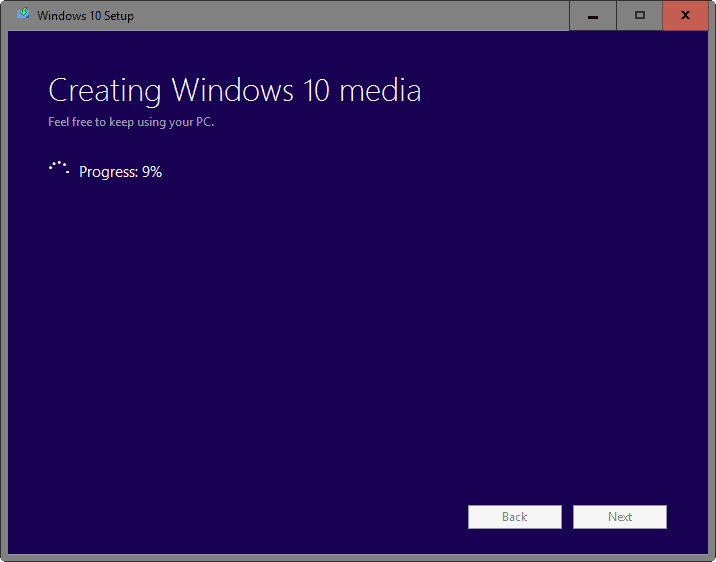 The license terms are displayed once the process completes.
Once you have read the license terms thoroughly, a check for updates is performed. This may take a few minutes. 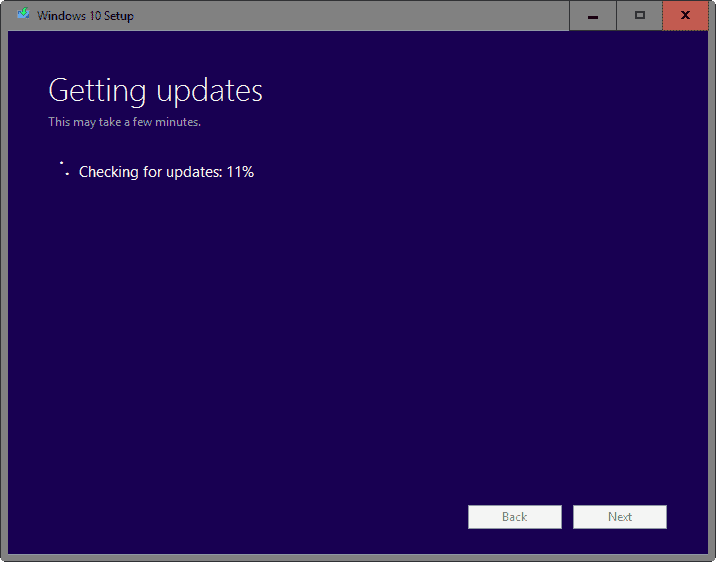 We will update the guide once the update becomes available.

If you prefer to use Windows Update to update a device running Windows 10 to the Anniversary Update version, then you may do that as well.
Please note though that you may not get it right away as Microsoft mentioned that the roll out would be gradual. Still, updates may become available as early as 19:00 CET on August 2, 2016.
Windows should pick up the Anniversary Update and either install it directly or offer to install it.


Making sure you have the Anniversary Update installed 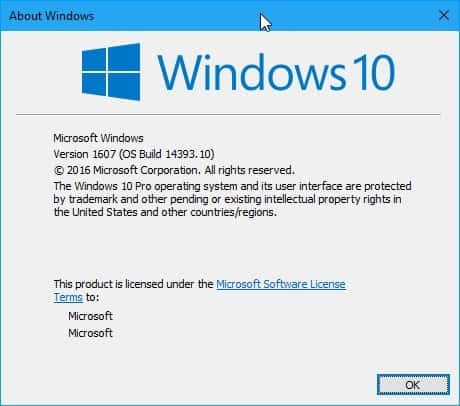 A cumulative Windows 10 update KB3176929 is delivered via Windows Update after the Anniversary Update is installed.
To find out if you are running the Anniversary Update on a machine, do the following:
The window that opens should read "Version 1607 (OS Build 14393.10)".
Ghacks needs you. You can find out how to support us here or support the site directly by becoming a Patreon. Thank you for being a Ghacks reader.
The post Download and install the Windows 10 Anniversary Update appeared first on gHacks Technology News.

Apple might be slowing down old iPhones to preserve battery life 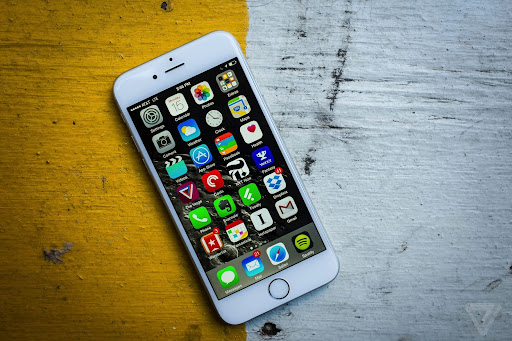 Reddit users have noticed that Apple appears to be slowing down old iPhones that have low capacity batteries. While many iPhone users have experienced perceived slowdowns due to iOS updates over the years, it appears that there's now proof Apple is throttling processor speeds when a battery capacity deteriorates over time.
Geekbench developer John Poole has mapped out performance for the iPhone 6S and iPhone 7 over time, and has come to the conclusion that Apple's iOS 10.2.1 and 11.2.0 updates introduce this throttling for different devices. iOS 10.2.1 is particularly relevant, as this update was designed to reduce random shutdown issues for the iPhone 6 and iPhone 6S. Apple's fix appears to be throttling the CPU to prevent the phone from randomly shutting down. Geekbench reports that iOS 11.2.0 introduces similar throttling for low iPhone 7 low capacity batteries.
Apple's fix could tempt users to upgrade devices Some Reddit users report that replacing their…
Read more