Showing posts from January, 2013
Show All

If you liked this article, you might find these interesting:BlackBerry 10 Link Desktop Software Gets Loads of Screenshots in Latest LeakBlackBerry Link D…
Post a Comment
Read more

Apple unveils new 128GB iPad:
Apple (AAPL) on Tuesday announced the upcoming availability of a 128GB version of its fourth-generation iPad tablet. The new slate will be identical to its predecessors in every way, but it will double the amount of available internal storage from the previous maximum of 64GB. Apple's new full-size iPad model will become available beginning on February 5th and it will cost $799 for the Wi-Fi model or $929 for the Wi-Fi + Cellular model. Apple's full press release follows below.

Microsoft Office 2013 Launches Tomorrow: What You Need to Know

Microsoft Office 2013 Launches Tomorrow: What You Need to Know:


Microsoft appears to be on the verge of launching the latest version of Office, according to a tweet the official Office Twitter account posted over the weekend. The tweet includes a picture of what Microsoft is setting up in New York City's Bryant Park for launch day, specifying Jan. 29 as the day of the event.
The new version of Office, Office 2013, represents a rethink of the productivity software. Microsoft re-designed Office for Windows 8, changing aspects of the design, features and back end to better suit a world of touchscreens, cloud connectivity and social networks.
Although the new Office is designed for Windows 8 machines, it's not actually a Windows 8 app. Office still run…
Continue reading...
More About: microsoft, Office 2013, Office 365 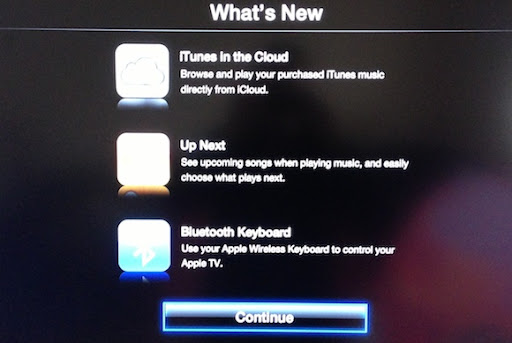 Apple Updates Apple TV with Up Next and Bluetooth Keyboard, New 'AppleTV3,2' Model Revealed: Alongside today's release of iOS 6.1, Apple also issued an update for the Apple TV. The new 5.2 software update includes a number of enhancements including direct iTunes in the Cloud music streaming, Bluetooth keyboard support, Up Next support, and more.
- iTunes in the Cloud: Browse and play your purchased iTunes music directly from iCloud.
- Bluetooth keyboard: Use your Apple Wireless Keyboard to control your Apple TV. See this article for more information.
- AirPlay audio for videos: Send stereo audio from movies, TV shows, and other videos on Apple TV to AirPlay-enabled speakers and devices (including AirPort Express and other Apple TVs).
- Stability and performance: Includes performance and stability improvements with the iTunes Store, AirPlay, Netflix, iTunes Match, and wired Ethernet connections.
Curiously, Apple has released three versions of the Apple TV update, coverin…
Post a Comment
Read more

Apple releases iOS 6.1 to iPhone, iPad and iPod touch users:
After months of beta releases, Apple (AAPL) has released the final version of iOS 6.1 for iPhone, iPad and iPod touch users. According to 9to5Mac, the new version of Apple's mobile operating system will feature enhanced support for LTE connectivity, the ability to use Siri to purchase movie tickets through Fandango, and improved iTunes Match capabilities that allow subscribers to download individual songs from iCloud. Apple had previously released five different iOS 6.1 betas to developers before putting out the final version on Monday.
Post a Comment
Read more

Turn Your iPhone Into A Gamepad With Joypad Legacy [Mac & Windows]

Turn Your iPhone Into A Gamepad With Joypad Legacy [Mac & Windows]:
Recently I have been away from home, with only work, an iPhone and a MacBook Pro to entertain me. While searching for a way to play a few multiplayer games I hit a snag – a distinct lack of controllers. While looking for a solution I came across Joypad for iPhone, and the now slightly outdated Joypad Legacy app.
Using a Mac or Windows PC and a couple of iPhones, it’s surprisingly easy to turn your handheld iOS device into a touchscreen gamepad. A lack of physical feedback means this isn’t suitable for “serious” gaming (whatever that means) but for emulators and brainless arcade games it does the job quite nicely.
The software means you can turn any Windows or Mac OS X laptop into a portable emulator or games console wherever you are. And it’s now free!
A Very Simple Setup The setup for this rather awesome freebie couldn’t be simpler. Head on over to the Joypad Legacy website and download Joypad Connect for Mac or …
Post a Comment
Read more

Turn Your iPad Into a Second Monitor for Free

Turn Your iPad Into a Second Monitor for Free:

WikiCancel Is a Collection of Guides to Closing All Your Accounts

WikiCancel Is a Collection of Guides to Closing All Your Accounts:


Sometimes the directions for closing an account on an online service are buried deep in a web site and impossible to find. WikiCancel is a wiki page that lists the cancellation procedures for popular services, subscriptions, and contracts. More »