Showing posts from February, 2013
Show All

Today we issued a software update for BlackBerry 10 smartphones that’s focused on your feedback. It’s already available from some carriers and we’re working closely with all our carrier partners to get it to you as soon as possible.
It’s almost been a month since we officially unveiled the new BlackBerry 10 smartphones and many of you already have a BlackBerry Z10 in hand. You’ve been using it for weeks, and we’ve been listening to your feedback, and have been working on an update just for you. Here are just a few of the improvements you can expect after updating your software.
3rd Party App Performance
We’ve improved performance for 3rd party applications, so developers can build apps that run fast and smooth for you. With this update, you might want to keep an eye out for some fresh new app launches in March, like WhatsApp.

Google introduced its Send to TV function with its YouTube Android application this past November, although it was only possible to perform the feature on Google TV set-top-boxes. Over the following weeks, native YouTube applications on game consoles and Smart TVs supported the feature, and today, iOS users can finally get in on the action as the official YouTube application has received the Send to TV” function. The Send to TV function currently supports the Xbox 360, PS3 and Smart TVs that have a YouTube application available to it. If you’re asking where’s the support for the Wii U, we don’t think that’ll happen any time soon considering how the Wii U’s gamepad can interact with the console in a similar way. (more…)By Ubergizmo. Related articles: Consumers Spent More On Mobile Games Than Handheld Games Last Quarter, Dolphin Nintendo Wii, GameCube Emulator Running On Android, YouTube For iOS Gets Send To TV Feature With Xbox 360, PS3, Smart TV Support
Daniel Perez
Thu, 28 Feb 2013 20…
Post a Comment
Read more

We do not know a lot about the operating system that is coming after Windows 8. It has been rumored for a while that Microsoft wants to reduce the time span between operating system releases considerable, and one of the technologies that got mentioned in this regard over and over again is Windows Blue. As it stands now, Windows Blue does not seem to be Windows 9, and while none of this has been confirmed officially, it appears as if we are going to see a release of Windows Blue this year. It is interesting to note that Microsoft is keeping the tight-lipped approach about future products after the departure of Steve Sinofsky. If rumors turn out to be true, Windows Blue will be a free update for Windows 8 users coming this August. Information about Windows Blue were posted on a Chinese forum. The main points posted there are: No major UI changes, which means no start menu, no changes to start screen / desktop interface. Lower power consumption. Better performance, downsized Kernel. S…
Post a Comment
Read more 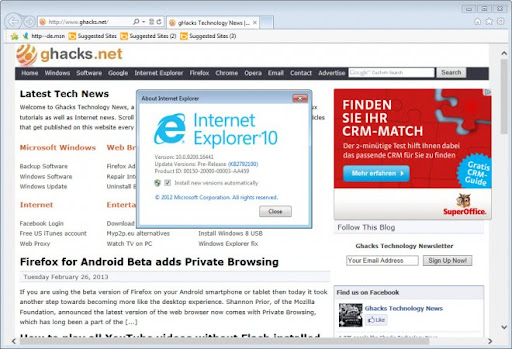 Unlock ANY BlackBerry for Only $6!!! @ BerryReview Unlocking Store Posted by the BerryReview Team for ©BerryReview, February 21, 2013, 10:17 am. |
BlackBerry World v4.3 Update For Legacy BlackBerry Devices |
Leave a comment |

BlackBerry World v4.2.1.109 rolling out to some BlackBerry Z10 owners

BlackBerry World v4.2.1.109 rolling out to some BlackBerry Z10 owners:

Taking a look through the CrackBerry forums and on Twitter, it's looking as though some BlackBerry Z10 owners have an update to BlackBerry World appearing on their devices. The noted version shows as 4.2.1.109 with the change log simply stating improved battery life and bug fixes.
As it appears now, the update isn't showing for everyone and in fact, it actually errors out on some devices leading me to believe it's likely still processing through. Either way, if you're a BlackBerry Z10 owner then go ahead and check for updates. In the meantime, we'll be keeping our eye on this for a more widespread roll out and update the post when necessary.
Discuss in the CrackBerry Forums
CrackBerry.com's feed sponsored by ShopCrackBerry.com. BlackBerry World v4.2.1.109 rolling out to some BlackBerry Z10 owners

Apple Launches iTunes 11.0.2 With Composer View:
Apple has launched the latest version of iTunes today. iTunes 11.0.2 comes with performance enhancements, bug fixes and a new Composer view for Music. The software update can now handle large playlists with improved responsiveness. The software update is reported to be 54.2MB in size and solves the issue of some users whose purchases weren’t showing up in their iTunes libraries. The update is based on the majorly revamped iTunes 11 which brought cloud integration with it.
Apple has been releasing updates today for a variety of things. Apart from iTunes 11.0.2, the Cupertino firm has also released iOS 6.1.2 firmware, which resolved battery issues caused by a Microsoft Exchange bug. Also released today was a Java update to fix a vulnerability which led hackers to access Macintosh computers of employees within Apple.  The updates within such a short span of time do give a positive image for Apple’s commitment towards resolution of issue. H…
Post a Comment
Read more Apple has just released iOS 6.1.2, their second minor point update, and as promised it fixes a bug that's caused network activity problems for Exchange calendar users.
iOS 6.1 was released on January 28 with Siri movie ticket purchases in the U.S., and increased LTE support internationally. iOS 6.1.1 was released on February 11, but was exclusive to the iPhone 4S, and fixed 3G network connectivity problems.
iOS 6.1.2 doesn't claim to fix the other, highly-publicized iOS bug -- a passcode bypass Apple previously said would be addressed in a future update.
A separate iOS 6.1.1 beta was released to developers on February 6, mostly focused on Maps improvements for Japan. That update is still awaiting release will likely be re-numbered.
If you've been experiencing the Exchange calendar issue, let me know how the update works for you.
How to update iOS 6 over-the-air (OTA)

Microsoft brings Outlook.com out of preview, begins shutting down Hotmail

Microsoft brings Outlook.com out of preview, begins shutting down Hotmail:
It seems there was a point to Microsoft's (MSFT) anti-Gmail campaign after all: It's meant to coincide with the launch of Outlook.com, the webmail alternative that Microsoft has been offering as a preview for the past several months. Microsoft on Tuesday announced that it was taking Outlook out of preview and was starting the process of transitioning its current Hotmail users over to the new system. Microsoft promises that Hotmail users will experience no disruptions in service and that "everything from their @hotmail.com email address, password, messages, folders, contacts, rules, vacation replies, etc. will stay the same, with no disruption in service." The company also says that Outlook has garnered more than 60 million active users in the past six months, thus making it the "world’s fastest growing email service."
Post a Comment
Read more
More posts