Showing posts from July, 2015
Show All

Google Promises Fix For Recently Discovered Stagefright Android Flaw
Ubergizmo  /  Adnan Farooqui
We reported on a newly discovered Android security vulnerability yesterday, hackers can gain access by simply sending a MMS message to the target's device and it doesn't even matter if that message is opened or not, Android's default media handling system would automatically process the message and activate the code. Naturally this has raised security concerns and Google has now come out with a statement on the matter, it promises a fix for this flaw by next week.The vulnerability is called Stagefright and it exploits how the Hangouts app automatically process incoming video so that it's ready for the user in the gallery. Hackers can put malicious code inside the video and since it will be automatically processed by the device it doesn't even matter if the message was opened or not.Google has actually been aware of Stagefright since April and has been working on patches …
Post a Comment
Read more

Microsoft Has Started Rolling Out Windows 10 Via Windows Update 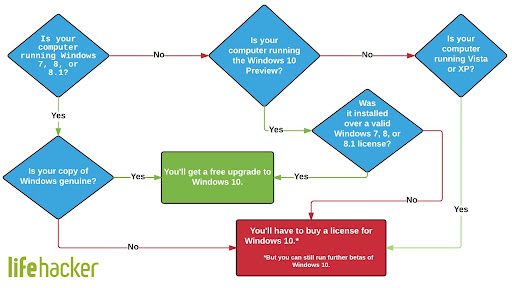 There's been a lot of confusion about who gets free upgrades to Windows 10 on July 29th, but this flowchart should make it nice and simple to determine if you do.
Click the expand button on the graphic for a closer look.
This chart, inspired and expanded upon from this original chart by Amit Agarwal, spells everything out so you know exactly where you stand. If you have a legitimate copy of Windows 7, 8, or 8.1, you're all set to get a free upgrade and you can reserve it now. If you're running the Windows 10 preview, and it was installed over a valid license of Windows 7, 8, or 8.1, you also have access to the free upgrade. If you're running anything older than Windows 7, or installed the Windows 10 preview beta without a previous license, you'll have to fork over the $119 for the standard edition or $199 for the Pro edition. You can, however, continue to use further betas of Windows 10 no matter what.
And if Microsoft changes their mind again, we'll be sure to…
Post a Comment
Read more

iOS 9 Will Delete Apps To Make Room For System Updates

How many times have customers decided to save money by buying a 16GB iPhone or iPad, only to find out that when it comes to installing a system update that they don't have enough space to do so? We're sure it has happened many times and it can be annoying trying to figure out which apps to delete in order to free up some space.
Well the good news is that in iOS 9, you won't need to worry about that. As you can see in the screenshot above which was posted on the MacRumors forum by user "The Doctor11", it shows a system message that warns users they do not have enough space for an update, and in order to make space it will automatically delete apps on behalf of the user.
Now before you freak out, you can rest assured knowing that they won't be gone for good. Instead iOS 9 will temporarily delete those apps and will reinstall them upon successfully updating your iOS device. It is unclear yet if this means that your settings, data, progression will be wiped compl…
Post a Comment
Read more

iOS users: You will never again have to worry about what apps and photos to delete before installing an iOS update.
In addition to limiting the size of the iOS 9 download itself, Apple has added a feature that will help ensure users with lower capacity or overstuffed devices are able to get the latest update even if they don't have enough free space on their device
See also: iOS 9 comes with 2 more apps you can't remove from your iPhone Those who don't have enough space on their iPhone or iPad will see an option to "allow app deletion" within the "insufficient space" notification that appears during the download process. First spotted by MacRumors, it appears the feature will temporarily delete certain apps in order to make room for the update. Once the update is installed, iOS will automatically restore the downloads. Read more...
More about Apple, Tech, Apps Software, Apps And Software, and Ios 9
http://mashable.com/2015/06/23/ios-9-deletes-apps/?utm_…
Post a Comment
Read more
More posts