Showing posts from May, 2013
Show All

How to enable the new Gmail in a web browser

Google just announced a pretty major update to Gmail, and you should now be able to give it a go in the browser, if you so desire. As our pal Paul O'Brien from MoDaCopoints out, all you have to do to enable the new tabbed organization is go to the gear icon on the right of the screen and choose "Configure inbox." (If you're using a wrapper like Mailplane, you might need to do this from a traditional browser first, then restart the app.)
Next you'll be asked which tabs you want to use -- primary, social and promotions are checked by default; updates and forums are other options. Once enabled, you'll find e-mails sorted among the tabs. To move e-mails between tabs, just click and drag. (You'll also be asked if you want to continue to get that particular kind of e-mail in the new tab.)
Still no sign of the new Gmail app for Android, which also will bring a new sorting experience. 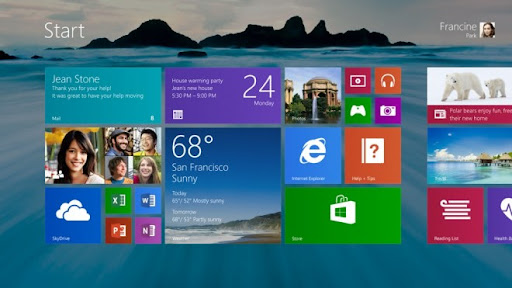 The Internet rumor mill is buzzing with noise ever since Microsoft announced that it would release an update for Windows 8 this year. Windows Blue, or Windows 8.1, is not a service pack according to Microsoft but a feature upgrade for the operating system. Windows 8 has been heavily criticized ever since first public versions were made available by Microsoft for testing purposes.
Yesterday news leaked about a start menu button that Microsoft would add to the system again (after having removed it in Windows 8) and a desktop background that you could now also display on the operating system's start screen and not only the desktop.
Microsoft revealed additional details and information about Windows 8.1 on a new blog post on the official Windows blog today.
It is clear from the post that Microsoft will continue on the path that it has decided on. While this won't satisfy die hard critics of the operating system, it may please others who have not as many reservations. Microsof…
Post a Comment
Read more

New details emerge on how the Start button might work in Windows 8.1

The most-clamored-for feature in the upcoming Windows 8.1 release is undoubtably the return of the Start button, the longtime hub of the Windows experience that Microsoft tried to ditch with the release of the touch-centric Windows 8 last fall. ZDNet's Mary Jo Foley, who has a long track record of accurate Microsoft scoops, has now given us some new details on just how Microsoft plans to re-implement the Start button in the next version of Windows due to be released this summer.

- May 22, 2013
Rogers, Bell and TELUS BlackBerry Q10's updated to OS 10.1.0.1720
http://feedly.com/k/14Ptr9eAlthough the OS has been floating around in various forms for the past couple of weeks now, it looks to have finally gone official across the board in Canada for the BlackBerry Q10. Confirmed to be arriving on Rogers, Bell and TELUS devices folks who check for updates should see that software version 10.1.0.273 is available. Oddly enough, if you check your device you may find that it's already on this 'software version' but that doesn't mean you should dismiss the update. In fact, you should download it because even though the software version is the same, the OS inside is not. Unless you've installed a leak or ran a customized autoloader, most BlackBerry Q10's in Canada should be running OS 10.1.0.1483 but with this download, even though the software version will remain unchanged, you'll end up being on OS 10.1.0.1720. We realize a good lot of you might have alr…
Post a Comment
Read more

Dropbox vs. Google Drive vs. Amazon vs. Skydrive: Which One Is Fastest?

Dropbox vs. Google Drive vs. Amazon vs. Skydrive: Which One Is Fastest?:
As cloud computing services become ever more popular, you might begin to wonder how much you can really trust them to perform when you need them? I decided to find out - by testing the top file-transfer/file-storage/file-backup services.
In many ways, getting a file from one computer to multiple computers is the most challenging task for the cloud. And because I like to use multiple computers running multiple operating systems, including Linux, Windows and the Mac, that function is particularly important to me.
Cloud Services Can Lag I am pretty agnostic when it comes to cloud providers - as long as they are free or close to it. However, as I was moving files around while preparing my most recent book A Week at the Beach The 2013 Emerald Isle Travel Guide I was a little surprised at the lags I sometimes experienced using the big-name cloud-based file-transfer services.
More than once when I wanted to use a file f…
Post a Comment
Read more

18-year-old’s invention can recharge a cell phone in 30 seconds:
A teenager from Saratoga, California took home one of the top prizes at the Intel International Science and Engineering Fair late last week after showing off her invention, which can fully charge a cell phone in 30 seconds or less. Eesha Khare was given the Intel Foundation Young Scientist Award and a $50,000 prize for being runner-up in the competition, which was won by a 19-year-old who unveiled a new spin on self-driving car technology. Khare's battery technology requires a new component to be installed inside the phone battery itself, and Intel notes that it also has potential applications for car batteries.
Post a Comment
Read more

Windows Blue Will Be Free - And Called Windows 8.1

- May 15, 2013
Windows Blue Will Be Free - And Called Windows 8.1
http://feedly.com/k/18Jo9iBMicrosoft's much-anticipated updated to Windows 8 will be free, will be called Windows 8.1 and will be out "later this year." All this news came on Tuesday when Tami Reller, the CMO and CFO of Microsoft's Windows Division, addressed JP Morgan's Technology, Media & Telecom Conference. Reller wouldn't commit to a launch date, but promised a public preview edition when Microsoft's Build 2013 developers conference opens on June 26.  Some reports interpreted Reller's remarks to hint at a full release around the Holidays. Windows 8.1 will work on both Windows 8 and Windows RT, the version of the operating system that runs on ARM processors.  See also:Microsoft Is Trying To Build - And Sell - A kinder, Gentler Windows 8Windows Blue's Goal: You Will Love Metro (Eventually)Tami Reller image is from an earlier Microsoft event.shared via http://feedly.com
Post a Comment
Read more

Official Details on BBM Coming to iOS & Android this Summer Official Details on BBM Coming to iOS & Android this Summer:
BlackBerry made a ballsy announcement today about BBM going cross platform. It has been rumored for ages and it seems like they finally decided it was time to wipe the floor with WhatsApp and the competition instead of keeping it exclusive. It remains mobile first but iOS 6 and Android 4.0 devices will be getting BBM this summer. That will include BBM chats, multiperson chats, share photos/video/voicenotes, BBM groups, and more. BBM channels will even be coming later in the year.
Here is what Andrew Bocking, Executive Vice President, Software Product Management and Ecosystem, at BlackBerry had to say:
“For BlackBerry, messaging and collaboration are inseparable from the mobile experience, and the time is definitely right for BBM to become a multi-platform mobile service. BBM has always been one of the most engaging services for BlackBerry customers, enabling them to easily connect while maintaining a valued level of per…
Post a Comment
Read more

Microsoft confirms Windows 8.1 preview to be available by the end of June

Microsoft confirms Windows 8.1 preview to be available by the end of June:
Windows chief Julie Larson-Green announced at the Wired Business Conference on Tuesday that Microsoft will release a preview of Windows 8.1 — also known as Windows Blue — at the end of June, ZDNet reported. The executive said that the company will release the preview at its Build developers conference that is scheduled to take place on June 26th in San Francisco. Microsoft previously confirmed that it plans to release the next version of the Windows operating system by the holiday season. Windows Blue is very likely to incorporate a lot of user feedback from Windows 8, which has proven to be a polarizing operating system that many users have complained lacks the intuitiveness of earlier Windows versions.
Post a Comment
Read more

For some time now Microsoft was maintaining two email services at the very same time. First the established Hotmail email service and then the recently released Outlook.com email service. Hotmail users could initiate a migration to the new email service using their account, but that was a mandatory thing up until now. Microsoft today announced that the company has finished migrating all Hotmail accounts and data from the email service over to Outlook.com. The numbers are impressive, as Microsoft migrated more than 150 petabytes of email in six weeks (a Petabyte or PB is 1000 Terabytes which itself is 1000 Gigabytes).  Back when Outlook was introduced as a preview in February 2013, it had about 60 million active user accounts. With Hotmail users finally being all moved over, Outlook.com is now home to more than 400 million active users according to Microsoft, making it one of the most popular email services on today's Internet. Today's news marks the introduction of two new fea…
Post a Comment
Read more
More posts